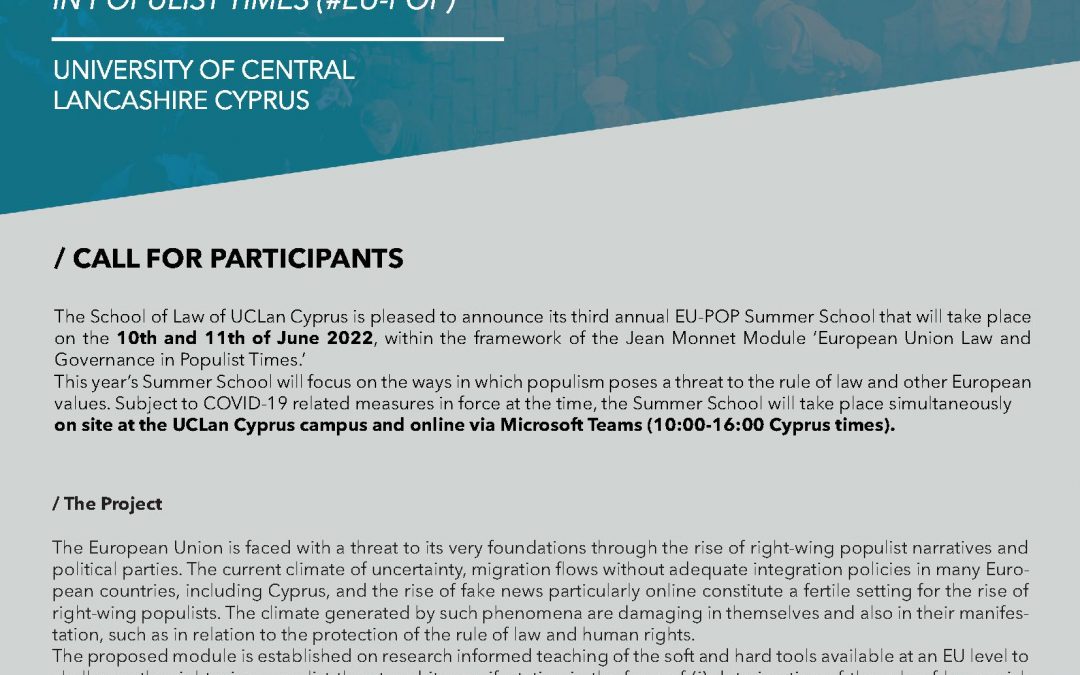 The School of Law of the University of Central Lancashire, Cyprus and  the Jean Monnet Module entitled “European Union Law and Governance in Populist Times” (EU-POP), co-funded by the European Union and running at UCLan Cyprus for the period 2019-2022, held their third and final EU-POP Summer School on the 10th and 11th of June 2022. Due to the ongoing pandemic, the Conference took place in hybrid format. The EU-POP Summer School promoted excellence in teaching and research and fostered dialogue among the many participants to the Summer School. The aims of the Summer School were, among others, to evaluate and assess the various threats to the rule of law and other European values that have emerged due to the rise of populist parties across Europe. The Head of the School of Law of UCLan Cyprus, Prof Stéphanie Laulhé Shaelou, EU-POP Module Leader and Academic Coordinator offered the welcoming speech, describing the outputs of EU-POP and the aims of the Summer School. She then proceeded to thank the participants for their interest and stressed the increasing importance of safeguarding European values in times of populism.

Dr Katerina Kalaitzaki delivered the first workshop of the Summer School discussing the concept of European citizenship in populist times. Her workshop stressed the various ways in which populist parties and agents across the European Union act in ways that pose threats to the very idea of European citizenship, by adopting more restrictive approaches to key components of citizenship such as membership. Following that workshop, Dr Aleksandra Gliszczynska-Grabias delivered a fascinating lecture on ‘Populist SLAPPs (Strategic Lawsuit Against Public Participation) against open society – the case of Poland and Hungary’. The lecture laid bare the ways in which law is weaponised by populist parties in Poland and Hungary to erode free speech protections. The lecture illuminated the key threats faced by various groups and NGOs in Poland and Hungary by the actions of the right-wing populist parties, emphasizing the struggle of judges who seek to resist the various government activities aiming to undermine the independence of the judiciary. Concluding the first day of the Summer School, Dr Andreas Marcou proposed a discussion on ‘Illiberal Democracies in Europe’ by exploring the ways in which populist parties have claimed to realise democracy. Analysing the ways in which those actions, which supposedly enhance and strengthen democracy, are in fact corrosive of the rule of law and, by implication, of constitutional democracies altogether.

The second day of the summer school begun with a workshop delivered by Dr Klearchos Kyriakides entitled ‘Maladministration and corruption as drivers of responsible populism’. During his analysis, Dr Kyriakides highlighted the ways in which institutional and personal corruption have become deeply rooted in liberal democracies and have in turn pushed citizens to populist parties. Advocating a model of responsible populism, Dr Kyriakides stressed the ways in which disenchantment with established legal structures can lead to their reshaping and improvement. The Guest lecture for the second day was delivered by Prof Vasil Gluchman who discussed ‘Education for Democracy: The Experience in the Visegrad Four’. In his lecture, Prof. Gluchman stressed the importance of democratic education in ensuring the creation of a citizenry robust and democratic enough to stave off populist abuses. Turning to the Visegard Four, Prof. Gluchman explained how the historical, social, and political realities of those four countries have resulted in a subpar system of democratic education. The final session of the summer school focused on ‘The European Union in populist times’ stressing present and future threats. Focusing on the various themes that emerged during the Summer School, but also drawing from the entire EU-POP project, Prof. Stéphanie Laulhé Shaelou and Dr Andreas Marcou discussed the threats that populism poses to European values, the ways in which populism can work to undermine democracy and the rule of law, and the ways in which the European Union should robustly ensure the protection of its key constitutional values.

Many thanks go to the EU-POP Team for their hard work in organising the third and final Summer School. We therefore also like to thank our guest contributors and all participants for their commitment and their valuable participation throughout the various sessions and activities of the Summer School. All material from the Summer School will be available here.