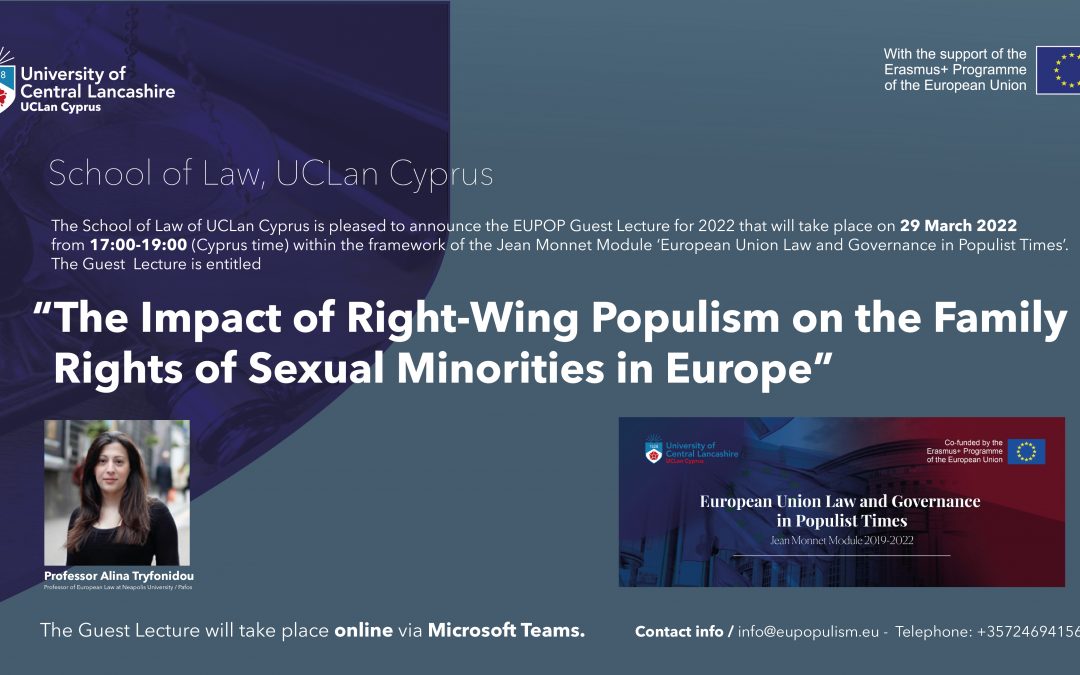 On 29 March 2022, the School of Law of UCLan Cyprus hosted a Guest Lecture by Professor Alina Tryfonidou, Professor of European Law at Neapolis University, Pafos. The lecture was entitled ‘The Impact of Right-Wing Populism on the Family Rights of Sexual Minorities in Europe’. This was another public Guest Lecture organised within the framework of the Jean Monnet Module ‘European Union Law and Governance in Populist Times’. Due to the COVID-19 pandemic, the event took place entirely online via MS Teams. The lecture was attended by students, academics, and legal professionals.

Professor Stéphanie Laulhé Shaelou, Head of the School of Law of UCLan Cyprus delivered the Welcome Address. In her address, Prof. Laulhé Shaelou introduced the EU-POP project and offered an introduction of the speaker. Before Prof. Tryfonidou’s lecture, Dr Andreas Marcou, Lecturer of EU Law and Theory at UCLan Cyprus and Researcher of the EU-POP project offered some initial comments on the rise of right-wing populism in Europe and the threat this poses to values such as the rule of law and democracy. Prof. Tryfonidou’s lecture was to pick up on those points exploring in detail the ways in which the rights of vulnerable minorities across the Union are threatened by populist activity. Dr Marcou concluded his comments by presenting CRoLEV, the new EU-funded Centre of Excellence taking place at UCLan Cyprus. For more information on CRoLEV, click here.

Prof Tryfonidou’s lecture began by noting the rise of right-wing populism and the threat this poses to the rights of sexual minorities. Supporting traditional forms of family structures, such populist parties vehemently oppose the extension of family rights to sexual minorities. A great concern associated with this is the fact that family law falls within the area of exclusive state power. This, she suggested, significantly constrains the European Union and hampers its ability to act in securing family rights for sexual minorities in countries ruled by right-wing populists. Through rigorous analysis of relevant case law (e.g., same-sex marriage in the European Court of Human Rights, cross-border recognition of family rights in the European Court of Justice), Prof. Tryfonidou identified the challenges supranational institutions face. She concluded that there is significant reticence on the part of European institutions (ECtHR, ECJ, other EU institutions) to impose positive obligations on Member States regarding the granting of family rights to the members of sexual minorities. Following Prof. Tryfonidou’s speech, the participants were offered the opportunity to raise questions.

Even though the Guest Lecture took place entirely online, it managed to fulfil its stated aims by identifying the threat populism poses to key human rights for sexual minorities. It also raised concerns about the fact that family rights of sexual minorities enjoy a varying level of protection depending on the country in question. This, in and of itself, constitutes a challenge to the European project.

The video of the full Lecture is publicly available at the following link: https://www.youtube.com/watch?v=flbzpU6Qnpc&ab_channel=UCLanCyprus