EU-POP Guest Lecture by Mr Andreas Kettis on ‘Tackling Populism in Europe: The Role of the European Parliament’ 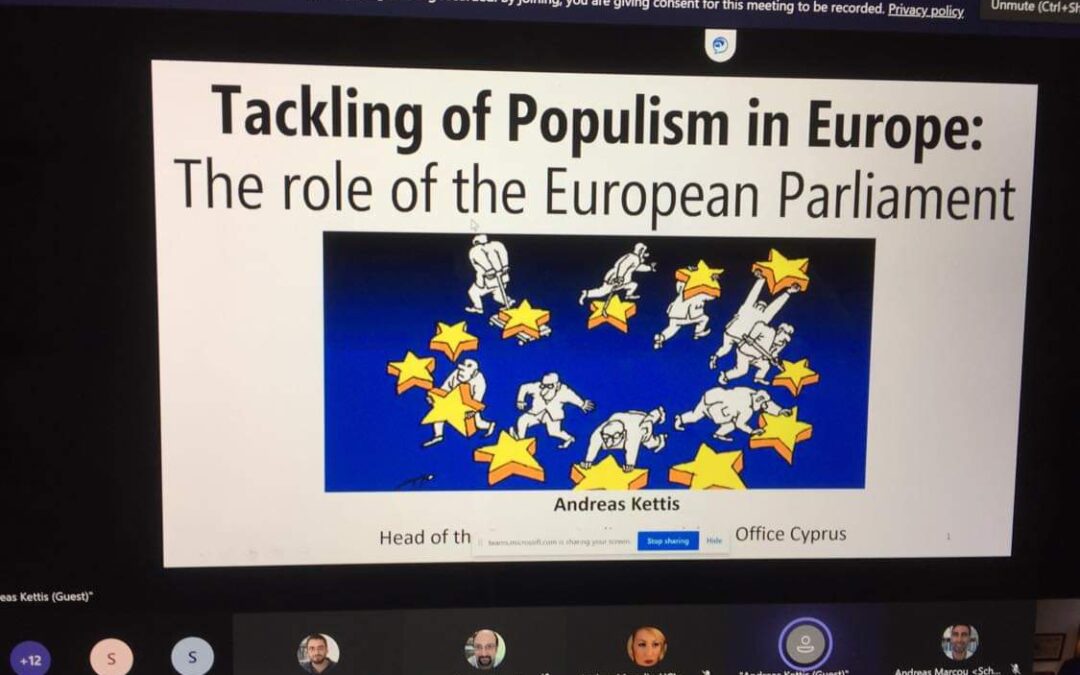 On 30 March 2021, the School of Law of UCLan Cyprus hosted a Guest Lecture by Mr Andreas Kettis, the Head of the European Parliament Office in Cyprus, entitled ‘Tackling of Populism in Europe: The role of the European Parliament’. This was the Second Guest Lecture organised within the framework of the Jean Monnet Module ‘European Union Law and Governance in Populist Times’. Due to the COVID-19 pandemic, the event took place entirely online via MS Teams. The lecture was attended by students, academics, and legal professionals.

Professor Stéphanie Laulhé Shaelou, Head of the School of Law of UCLan Cyprus delivered the Welcome Address that marked the start of the event. After introducing the invited speaker, Professor Laulhé Shaelou offered an introduction to the evolution of the European Parliament as the most democratic EU Institution, stressing the enhanced role of the Parliament in modern day European Politics, particularly in turbulent times. The Parliament constitutes a pillar of democracy at the heart of the European Union and has become a core actor in decision-making procedures.

Following the Welcome Address, Ms Andrea Manoli offered brief comments introducing the JMM EU-POP running at UCLan Cyprus. Ms Manoli detailed the various activities that have been organised by JMM EU-POP and introduced future activities. For more detail on these, please visit the website https://eupopulism.eu/. Dr Andreas Marcou then briefly discussed some general issues related the rise of populism across the EU, stressing the threat it poses to fundamental European values such as the rule of law and democratic governance. In detailing the possible legal tools at the Union’s disposal in its effort to tackle such threats to its core values, he further explained the limits that such mechanisms have and the shortcomings in the EU’s structure that make effective legal action against populist actors difficult to achieve. This introduction set the stage for Mr Kettis’s lecture.

Mr Kettis’s lecture began by identifying the rise of populist parties in various European countries. Those parties, he explained, could be far-left or right-wing groups. The most significant threat, however, comes from right-wing parties who advocate anti-human rights, anti-immigration, racist positions that are fundamentally at odds with European values protected under Article 2 of the Treaty on the European Union. Mr Kettis identified reasons for popular appeal of right-wing parties and argued that to the extent that such parties are represented in the European Parliament, it is imperative that they also observe the Parliament’s rules of procedure and decorum. Those rules of procedure are necessary for the smooth functioning of the Parliament and non-compliance attracts penalties. Mr Kettis then investigated how right-wing populist parties operate within the European Parliament, either to disrupt its operations, or by treating it as a forum from which they can send messages to national voters. Mr Kettis’s lecture concluded with a closer look at the cases of Fidesz, the British Eurosceptics at the European Parliament who played a prominent role in the Brexit debate, and the influence Donald Trump’s populism has had on European politics.

Following the Guest Lecture, Professor Laulhé Shaelou offered some remarks, explaining how the populist threat amounts to one of the various crises that the European Union has faced in the past, and that is currently facing. She therefore stressed the importance of European action not just at the political, but also at the social level. Following those remarks, participants were offered to opportunity to raise questions.

Even though the Guest Lecture took place entirely online, it managed to fulfil its stated aims by identifying the threat populism poses to core European values, the steps the European Union can take to protect itself, and the position of the European Parliament. The European Parliament, as a core decision-making body, can play a crucial role in this fight against right-wing populism that seeks to undermine democracy and the rule of law.

A Certificate of Attendance was awarded to all participants.